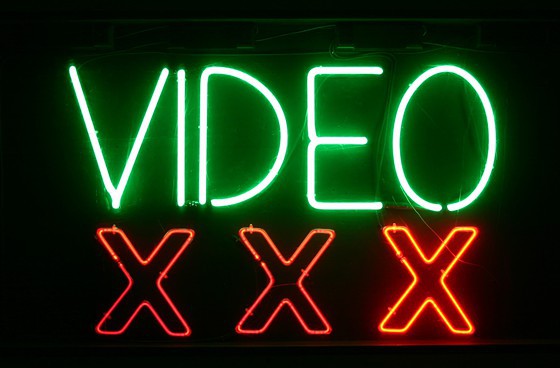 Previously, porn was only on my radar in a general sense—I knew crossover pop culture figures like Ron Jeremy and Jenna Jameson, and I’d flipped past the odd softcore clip on Cinemax or the Playboy Channel when I was a kid, but it had never held any interest for me, and I had never watched a film, or even a scene. I knew that had to change, so I put Google on the case and soon had a handful of clips of top male stars to view. The first surprise was that the men were more attractive than I expected—and not one of them had a Village People/porn ’stache. Okay. Time to hit “Play.” Clip #1: A little intro dialogue set the scene, which took place in a bathroom, and that was the extent of a plot. The male performer, a 40-something veteran, and his much younger co-star rolled through a series of sex acts—various intercourse positions, plus oral—like they were ticking them off a checklist. When she went to give him a blowjob, he grabbed her head and forced her to deep throat him. She immediately came off of him and (off-camera) vomited into the sink; after a brief fade in the footage, she was back to work. Okay. Time to hit “Stop.” Needless to say, I found nothing about this arousing—dude was just too rough. #NotMyJam

The next two videos were, content-wise, almost the same: Each pair of performers rotated through a variety of acts and positions with a minimum of dialogue, touching or affection. I found it all very soulless and mechanical. I wish I could say I was titillated at some point but, quite frankly, I was only bored.

On to clip #4, which starred a performer named Mick Blue. As soon as the scene began, I could tell it would be different, as Mick spent a lot of time up front kissing and caressing his partner. Once they began having sex, he continued to touch her and maintain eye contact throughout. I’m not sure if Mick was attempting to bring romance to the storyline, or just showing care and consideration for the girl with whom he was paired, but his actions were actually romantic—unlike anything I’d seen in the other clips, and more akin to what one would find in a mainstream film. Maybe this was an atypical scene for Mick—I haven’t watched others to know—but his demonstrative actions were a million times sexier than the emotionless gymnastics of the other clips, and he impressed in a way no one else did.

After only a couple days of reading tweets from stars and fans, one thing jumped out at me: Loneliness was rampant—among both performers and their followers. The first person with whom I chatted was a 30ish male fan from the Netherlands, who followed many female stars. He often tweeted comments to them along the lines of “Thank God for porn. I wouldn’t get off without it, since women hate sex.” After reading a string of his tweets on this theme (none of which were acknowledged by the stars or other fans), I felt obliged to respond, telling him that I enjoyed sex and thought most women did, and wished him better luck. He replied with his thanks, saying he felt as though he were “in an ocean with not a drop to drink” and that he’d felt lonely and invisible to women for years. This was a theme I would see repeated constantly.

Since the porn star in my story is male, and I wanted insight into his potential mindset, I spent much of my time reading tweets from the men and their fans. However, I did follow some key women, and had a few takeaways on female performers: 1) They are younger than I realized—many as young as 18 and few over 30. While many male stars are in their 30s or 40s and have been working for a decade or more, the shelf life of female performers is much shorter. 2) The girls/women who were in relationships were almost exclusively with men also in the industry. I’m sure there are some, but I didn’t run across a single woman who was dating a civilian. Many ladies who were unattached tweeted regularly that they were horny, lonely or wished they had a significant other. Their reluctance to date anyone who isn’t tested for STDs every 14 days (as porn performers are), and the fact that many men look down on women who’ve had so many sexual partners, seems to make dating civilians a rarity. 3) Drug use is common and acknowledged (this is true of the men, too—not even counting the ED drugs/injections most men use on-set), especially smoking pot, and there were scores of tweets about using, as well as complaint tweets about shoots being cancelled because various female performers flaked/were no-shows/were high, etc. 4) The wish list phenomenon (in which female performers ask fans to buy them clothing, jewelry, etc.) is distasteful. Not all of the women have wish lists. And some state that in lieu of gifts, fans may donate to a favored charity. Others, though, spend a lot of time angling for gifts. 5) Garish stripper platforms and over-pronounced eyebrows are (mostly) prerequisites for filming. As a woman with a penchant for beautiful Italian heels, I found the shoes baffling. Men must like them? #AlsoNotMyJam

As much as you can get to know anyone from his/her tweets (and some Twitter accounts read like virtual diaries), I found the women in porn to be just like any other cross-section of women. Some were uneducated, depressed, troubled, from abused backgrounds, etc., and seemed fragile and very ill-served by their present careers. Other performers came across as disingenuous, their bios stating how much they loved their work, when what they really appeared to love was that the work is lucrative (top stars can earn low- to mid-six figures annually); these were the performers whose tweets were always in sales mode—“buy my movies/clips, look at my wish list, watch my Cam Show, come see me feature dance.” Such relentless shilling and manipulation is a feminist’s nightmare. However, there are also women in the genre who are strong, business savvy, compassionate and intelligent. One star live-tweeted a Republican debate with such wit and insight that I found myself wishing she were the moderator. And I was particularly impressed with Anikka Albrite, whose tweets about art and animals consistently entertained, and who on multiple occasions reached out with kind words to someone in need. (FYI, Anikka happens to be married to Mick Blue, and I fell a little in love with this couple. They both have a lot of heart and humanity.) I didn’t have any preconceived notions about female performers, and I was not surprised to find strong, smart women in porn—we as a society have a tendency to paint everyone with the same brush, and that is always a mistake.

In my timeline, one star stood out: a veteran performer who was a man’s man but also thoughtful, sensitive, romantic and sensual, successful in his field but also conflicted, and he wore his heart on his sleeve—or at least on his app. In short, he shared many traits with my character. In his tweets, this man spoke frankly about the clinical nature of his work; about his loneliness and longing for a relationship; and his desire for purpose and meaning in his life. He shared his past struggles with addiction and depression. On multiple occasions, his words were tinged with sadness and near-despair, and I felt compelled to reply. He subsequently ended up following me and we exchanged DMs. Though he never said it outright, I inferred that he’s ready for a different path—one without porn. And though he’s usually dated fellow porn stars, I inferred that he’s open to a new path there, too. It appeared that he had few people in his life who were not either in the adult industry, or fans; at one point, I offered my (more objective?) friendship, as I felt empathetic—I am a Pisces and he is a sign I understand—but as a stranger, my purview was limited. Nonetheless, I ached for his struggles and felt…sad. I still do.

One more note about that male star: He’s my age, and a chunk of his fandom is women in their 30s/40s/50s. These ladies regularly flattered and propositioned him, and their tweets almost always went unacknowledged. However, when women in their early 20s with model-ish profile pics tweeted him, they almost always received a reply, occasionally with an invitation. Why men in their 40s/50s so often want to date women in their 20s—even when the traits they profess to desire are most likely found in women their own age—is another subject, but I raise it here because of the frequent age difference between men and women in porn. When 50ish men are routinely sexing up 19-year-old girls, it can’t help but impact performers and viewers.

After weeks of immersing myself in the XXX world, I went back to work on my manuscript with a new perspective…and a rather heavy heart. My heroine’s heart was heavy, too, sadness permeating her words. One of the first things she told the hero was that she felt she had nothing special she could give to him…there was nothing he hadn’t already experienced a thousand times over. Fortunately, they’ve since begun to realize that there are some things they can give each other that neither has had before. It remains to be seen if and how they’ll get to happily ever after.